If you joined us last week for wine club, then you ate the following and this is why and how! 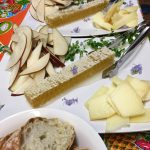 We seated you to platters of honey in its comb, red d’anjou pears and a beautiful Pecorino (Italian sheep’s milk cheese). We made the platters prettier by adding some color in the form of pea shoots and rosemary flowers. The pear and honeycomb leapt right out of our 2018 Fischerman’s Pinot Gris, the saltiness of the cheese balanced it all out. Many asked — I found whole trays of honeycomb at Barbur World Foods on Barbur Boulevard, a true delight. If you haven’t stopped there yet — do.

The second course was all local focus, highlighting our friends at Even Pull Farm; I really couldn’t be more impressed with the consistently high quality of their produce. Look for them at the McMinnville Farmers’ Market this year. I built this course off of what they had in season. 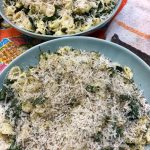 To be honest, I was originally inspired by their arugula — it was so peppery and a delicious pairing with the Dolcetto but it bolted…c’est la vie or c’est farming. I was fairly committed to the idea of a pepper component with the Dolcetto by that point, but I also wanted to bring out some of the more subtle flavors in the wine. We served you orchiette with green garlic — mild compared to traditional garlic application — and rapini. Rapini can get a bad rap for being bitter, but this was sweet and delicious!

To make this dish, I sauteed, over low heat, the green garlic, pignoli (pine nuts), fresh chopped oregano and maybe or maybe not some lemon rind — depended on my mood/palate. I brought the pasta water (salted always) to a rolling boil and threw in the 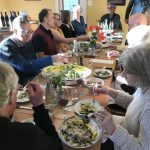 chopped Rapini, let it cook for a few moments then added the orchiette. Brought it all back to a boil, strained it, tossed it with the green garlic then finished with olive oil, shaved Parmesan and freshly ground black pepper. I used my stone mortar and pestle to grind the pepper, as with many things in life, the process dictates the product. I never buy pepper unless it’s still in peppercorn form — freshly cracked black pepper is a flavor far and apart from “black pepper.”

Lastly, we served Porchetta with fresh orange zest over the top. The 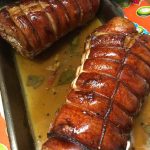 Porchettas were cooked in a deep pan with a shallow pond of our Pinot Gris, bay leaves, chili peppers, peppercorns and rolled with fennel seed, garlic, chilis. When cooking Porchetta, go low and slow, “baste” occasionally and cook uncovered “until the outside is gorgeous, crispy, mapl-y brown,” that’s what Carmen said when I picked them up. It’s always important to give credit where it’s due, and if you’ve had Nick’s Italian Cafe Porchetta (and now you have) you would understand why I asked to pick up uncooked Porchetta from Carmen —  leaving me just to cook them off. Speaking of Carmen — two events to make note of:

I cooked each Porchetta for about 3.5 hours then let them rest for at least 1/2 hour. The longer they rest, the easier they are to slice. 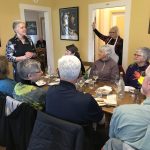 Remy and her mom, Joan.

Going back to giving credit —  when we were in recipe testing stage —  it was Erin that said the Porchetta would be better with some citrus to really tie in the Sangiovese. The truth is, we have a cracker-jack team and they make my job easy. I know they…Erin, Hannah, Diana, Sharon and Jonathan took great care of you. You may not have seen, but we also couldn’t do this without Annika, Ralph and Dan. And of course, my Mom, who I mentioned in the last post, helped us prep for several of the parties. It’s a team effort to deliver something extraordinary ever time. 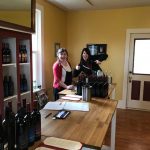 For dessert (most days) we served the 2014 Barbera, which is now sold out!

Oh you vegetarians…I almost forgot. I roasted fennel bulbs with garlic, cippolini onions, carrots, tossed in a 30 year aged balsamic. I was trying to pull out the same elements in the wine with your dish as I was with the Porchetta!

We have another series coming up, so look for one more set of recipe collections. Thank you for being club members and for challenging me to deliver something fantastic every time. 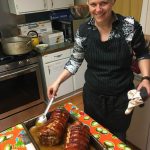