Recipe Collections — A note from Remy 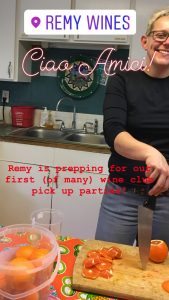 Pinot Noir Celebration and the book (recipe cards in a small wooden wine box) was a compendium of the many great dishes that had been served at the event during her tenure.  Each recipe had to be broken down from, “serves 150” to “serves 6” or something along those lines.  So she tested and tested things at home in the kitchen.  Mom is a phenomenal cook, one of my older brothers became a Professional Chef then taught Culinary School and now writes great articles for different publications reviewing restaurants.  (You can sample his writing here).  Cooking has been a skill I inherited through osmosis rather than study. Mom helped me prep for these meals, though the “recipes” are all mine.  That said, I don’t really cook from recipes, just from the heart, so here is my best rendition of what I made for you this week and why. 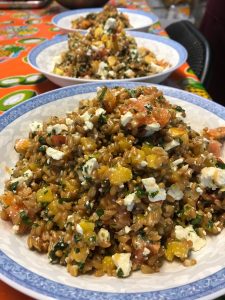 You asked me how I do the pairings; I look for flavors in the wine (with our team) then try to match those flavors and highlight them with the food.  When Erin first tasted the 2018 Rose she said “Nectarines!” and I ran with it from there.

I like farro because it’s a bit nutty (like me), and works as a building block. Emmer Farro from Blue Bird Farms in Washington is really delicious, it’s what I used.  Bring your water to a rolling boil, add the farro, boil for a few minutes then simmer for an hour or until you’ve reached your desired texture – I like mine a little al dente.  The herbs I chose were both for freshness and to brighten the flavors of the salad, the shiso specifically has a licorice quality to it that I find in a lot of my red wines, especially the Sangiovese.  The fruits, as previously mentioned, were all flavors that we found in one of the two wines we paired with this dish.  The ricotta salata was for the saltiness, a cheese that is quite mild but has great salinity. 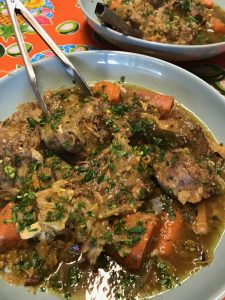 Start with a very deep, thick bottomed pan.  Use a hot, hot fire underneath to heat some olive oil, salt and pepper your short ribs then put them fat side down into the oil, they should sizzle and pop.  Brown them on all sides.  Dust with cinnamon and turmeric, throw in chopped onions and shallots (ours were from Even Pull Farm), at this point I try to turn everything a bit so the onions will caramelize while I’m getting everything else in the pot.  Now add the following: Star Anise (just a couple, these are strongly flavored), whole garlic, big pieces of fresh ginger, Bay leaves (mine were home grown – plant a laurel bush as a nice natural green screen and to give yourself a lifetime supply of the best bay leaves ever), chopped carrots at least 1″ long, then fill the pot to the top with sliced cabbage (Even Pull and Boyer Farms).  If you can turn it, do – if you can’t – oh well.  Add some stock to the pot to get things going, as it cooks, the veggies will release a lot of liquid, so I only fill the pot about 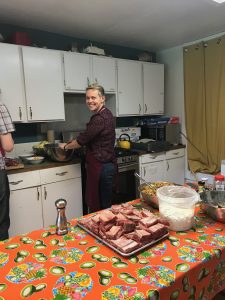 half way with stock.  Cover and put into a 250 degree oven until falling off the bone.  I find braised meats are best the next day so I cooked yours one day in advance, braised for about 4 hours then put them back in the oven for about two hours before serving them.  This overnight rest also gives you a chance to skim the fat off before reheating so they aren’t greasy.  The spices were really subtle in this dish but very important; cinnamon, turmeric, ginger, anise, think about those flavors the next time you take a sip of my Lagrein. 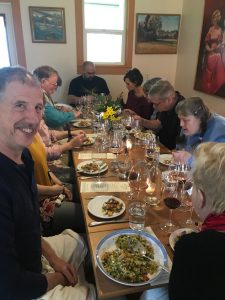 The menu will most undoubtedly change before the April parties – but don’t fret – it will be good too!  Lastly, our team has really made these events great and I would be remiss not to mention everyone.  From the folks you see and interact with during the party to those making it all come together in the office and doing the dishes, I’m only able to do this because we have a great team.  Thank you Annika, Ralph, Erin, Hannah, Diana, Sharon, Jonathan and Dan!

And of course – Thank You Bell’Amici!

If you like Remy’s cooking, you’ll be blown away by her longtime friend Chef Kate Romane and friends from Black Radish Kitchen in Pittsburgh. While our Fire Dinner has sold out, we still have available tickets for the Friday Evening Social on July 12th. Purchase tickets on our website.